Home » Blog » K-12 Education » Are Private Schools Worth It?

Are Private Schools Worth It?

The great debate about whether private schools are better than public schools continues in forums across the United States as schools struggle to return to normalcy after the pandemic. It is commonly argued that private schools are more accountable for learning outcomes. They are seen as better platforms for the overall development of students both in terms of academic achievement and moral values. On the other side, public schools have been praised for providing universal access to free education cutting through every demographic cross-section. In this article, we’ve compiled opinions, survey results, and data that help us answer this conundrum as to whether private schools are indeed better than public schools or vice versa.

What choice of schools do American parents have?

There’s much to glean from the data provided by Guide2research.com about the schools in the US. There are just over 137,000 schools in the US. Of these, around 98,500 are public schools and around 32,500 private schools. It is clear that a good one-third of the overall school strength in the US is private. The remaining are made up largely of charter schools.

In the US, public schools cater to the specific zone or district they are located in. It means every family must necessarily send their children to the public school in their district, i.e., the school that is assigned to them. This poses a problem because the reputation of public schools varies greatly depending on various factors. If a family wants to attend a different public school, it would need to move to that district.

Private schools have a legacy and place in US history. They are the first form of schools that appeared across American cities and towns. As of 2018, US private schools had an average enrolment size of approx.150 students, and an average class size of about 19 students. On both counts, the numbers are significantly smaller compared to public schools. The student-to-teacher ratio is 12 to 1 which is an improvement over that of public schools.

Charter schools are a proper blend of private and public schools that were introduced in the 90s. They came in response to the criticisms against public schools and in a bid to reform public education systems. They are independently run public schools – they don’t restrict enrolment based on criteria such as religion, ethnicity, abilities, etc. However, parents need to apply for a seat given the limited openings. Additionally, charter schools are free to charge a tuition fee in addition to government funds. Charter schools were founded with the objective of improving the quality of American public schools. The first charter school was founded in Minnesota quite recently in 1992. 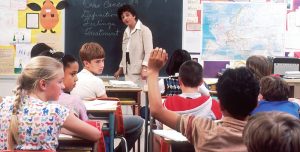 School Choice in the US

Educators have expounded views on this private vs. public school debate. Three decades ago, John Chubb and Terry Moe argued that parents needed to have a choice and autonomy in school selection. Their book, titled ‘Politics, Markets and American Schools’, fueled a movement that led to the formation of charter schools.

More recently, in ‘The Public School Advantage,’ authors Christopher Lubienski and Sarah Lubienski offer evidence that public schools perform better than their private counterparts when it comes to math scores in elementary school.

In ‘Public vs. Private’ by Robert N. Gross, the relationship between the government, market forces, and schooling through history. He shows how both private schools and public schools have been a matter of public policy throughout the history of the United States.

What do American parents want in a school?

We have seen how education reformists have argued in the favor of choice and autonomy in the decision on where to send children to study. Now let us flip this debate and examine it from the perspective of what parents are looking for in a school, i.e., what factors influence their decision on the choice of school for their children.

The National Household Education Surveys (NHES) program has conducted the Parent and Family Involvement in Education survey which studies the reasons that drive a parent’s choice of school for K12 students. Four categories of parents were identified, public-chosen, public-assigned, private-religious and private-non-religious schools. 36% of parents surveyed said that they considered multiple schools before deciding on one.

Out of these 36% of parents who considered various school options:

A comparison of priorities between specific categories of parents

Safety: All the categories were pretty much in agreement on the importance of safety, with the percentage of respondents ranging from 69% to 71% in each.

The number of students in class: It appears the parents in the non-religious private school category laid a great deal of stress on classroom strength at 58%. The other categories ranged between 35% to 37%.

Costs: School expenses seemed to matter the least to the non-religious private school category with only 14% of the respondents indicating that as a factor. Not surprisingly, this figure is at 28% in the public assigned category.

The religious orientation of the school: Interestingly, only 38% of the parents in the religious private school category actually stated this to be a factor they were concerned about. For all other groups, this factor was of no consequence.

The U.S. Department of Education’s National Center for Education Statistics gives us excellent insights into trends in school choice. In their report titled School Choice in the United States, they compile the findings of several surveys on the private school vs. public school debate and give us a cohesive snapshot of the findings. The report studies options such as traditional public schools, charter public schools, private schools, and homeschooling. Here are some insights we get in the reports:

Enrollments in both types of public schools (traditional and charter) have increased over time. The number of charter schools is growing manifold while the number of private schools has grown just 1% in the last couple of decades. Private school enrollment has decreased from 10% to 9% during the 1999-2016 period.

Distribution of students across school types:

School Choice in the US

Accessibility in different types of neighborhoods

The data also suggests that higher-income families tend to enroll their children in private schools. 79% of private school students are non-poor. You’ll find the highest concentration of poor and near-poor students in charter schools at 19% and 26% respectively. This is closely followed by assigned public schools.

Poverty status of the families in each school type:

School Choice in the US by Income

There is a growing trend towards non-sectarian private schools among non-poor households, although enrolment in Catholic and Christian schools still remains high. In 2016, 24% of private school students were enrolled in nonsectarian schools.

The wallet implications of school choice

According to the National Center for Education Statistics and Educationdata.org, the average cost of one year of private elementary school is $12,350 (in 2020). One year of private high school is $16,040 (in 2020). And that amount doesn’t take into account boarding schools, which can easily cost $37,590 or more per year. It doesn’t end here. You need to buy books and supplies and even pay extra for some extracurricular activities.

A common argument is that children can get a “free” education in public schools that are paid for from tax dollars. But what’s free may not always measure up in quality.

School Choice in the US by Parent Education 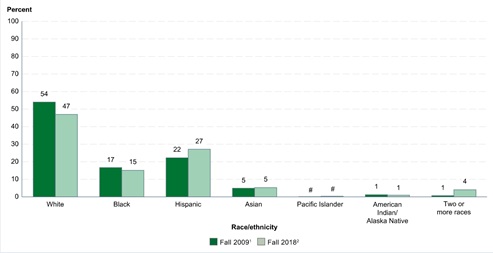 School Choice in the US by Race 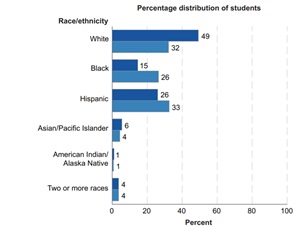 School Distribution in the US by Race

Why parents choose what they choose

Public schools adhere to the principles of universal education and are funded by tax dollars for upkeep. This is perhaps the biggest attraction behind choosing public schools. Many communities around the US have a vested interest in the success of their district public schools because they are the only option they have. As we all know, community involvement is always welcome. The public-school environment is typically open and diverse which many parents find culturally enriching for their children.

Private schools are definitely heavier on the pocket but you can also be more selective in choosing the learning environment for your child. This could be in terms of a particular value system, worldview, socio-economic status, or even learning methodology. Even though private schools are known to have their own standards for the quality of teaching staff, they are also expected to be more accountable to the parents for students’ progress. Since private schools were the very first schools in America, there’s a heritage value attached to them. There may be families who claim that they have been going to Exeter or Ashville for generations.

If you feel inconclusive about which type of schooling is better for your child, we are not surprised. All of the United States hasn’t still answered this question. But what we do know now is why parents choose what they choose. Your choice on the right school platform for your child should be based on which side resonates with your worldview.

You may also choose a private school over a public school if your assigned school is clearly below the standard you expect for your kids. In that case, your choice is clearer as far as the quality goes. The only question is where you can afford it or not.

Top Trends in Education That Every Educator Should Know

Test Anxiety and Ways to Manage It

19 mistakes to avoid when starting an online tutoring business

Ready to get started?

Find out how Vitutors works for you

Got questions? Get in touch with ViTutors